Below is a scan of a flat promo card used in the 7-11's to advertise the Star Trek: The Next Generation Slurpee Cups. These came out sometime in 1993, I think. I managed to get them all, and I will have to post some photos of them soon. The card is about a foot tall. 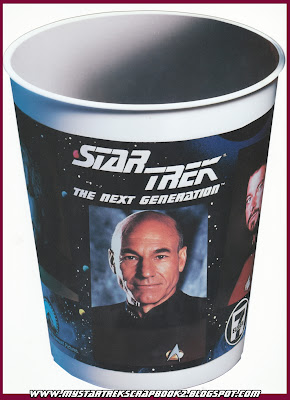 Posted by Frederick McCloud at 12:15 PM 2 comments: Links to this post

From issue #186 of Starlog, published in December of 1992, comes this article on Patrick Stewart's live stage performance of Charles Dicken's incomparable "A Christmas Carol." Although I never got to see him do it live (and I think he still does it, nearly twenty years later, I do treasure the audio CD set that captures his dramatic reading. In my mind, there could never be a better delivery, and now when I read the book I hear his tones and inflections in my head, enhancing the experience. 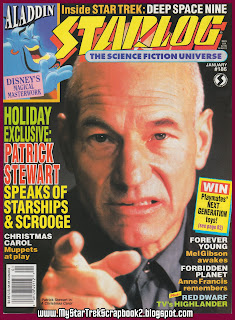 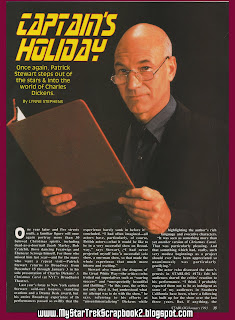 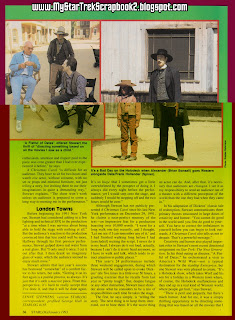 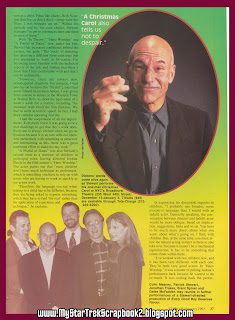 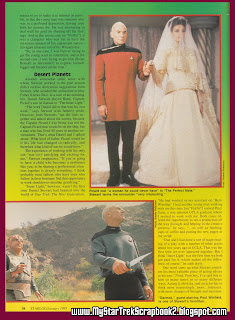 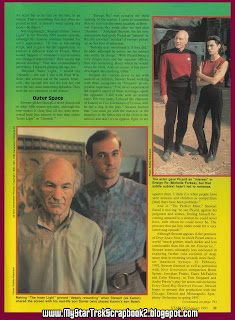 Some years later he would go on to act the role of Scrooge in a film version, and while it is a fine addition to my collection of adaptations, it doesn't outdo the audio recording. Hearing Stewart deliver so much of the original text is a better experience to me than seeing him limited to acting out the one role, as fine the acting was in that role.
Posted by Frederick McCloud at 11:43 AM No comments: Links to this post

From issue #53 of the Star Trek Official Fan Club Magazine (when it was still in digest-sized form), published in December 1986, comes this article on the new Star Trek series that Gene was working on, called "Star Trek: The Next Generation." It was so early in the planning stages that the article states that they had not yet even decided if the ship would look any different from the movie Enterprise, since there was so much footage of it already. I'm glad they went ahead and designed a new version, which was necessary for the show to further stand apart from the original. It's interesting reading about the contributions from TOS veterans, before they conflicted with Roddenberry and jumped ship. My opinion is that it would have been a better show from the start had they been allowed to have freer input. 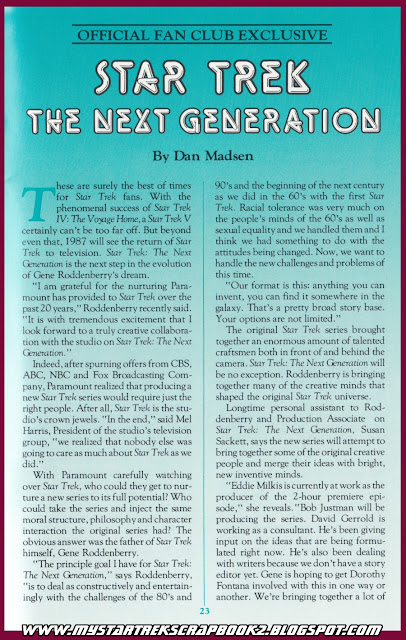 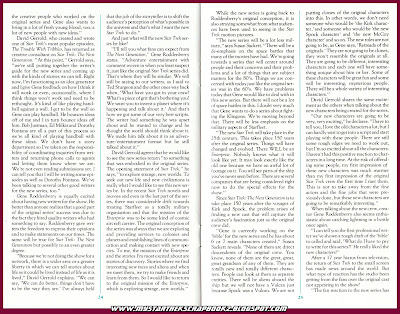 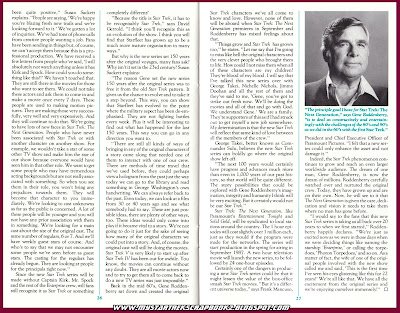 Bonus: Below, a TV Guide clipping featuring an ad for the first look at the show!

Bonus: Below, an ad flyer from sometime in 1993 (or somewhere thereabouts) for a convention featuring Data himself. 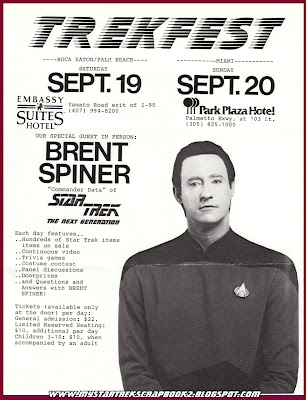 Posted by Frederick McCloud at 7:33 AM No comments: Links to this post

From issue #174 of Entertainment Weekly magazine, dated June 11, 1993, comes this photo feature on a few of the sets from The Next Generation. Really, they should have covered the main intemix chamber of Engineering rather than just the monitor board. They also missed others like Sickbay, the transporter room, the conference room, etc. This could have been a more in-depth effort rather than just a three page fluff piece, but it was from EW, and for the casual reader this was probably more then enough. 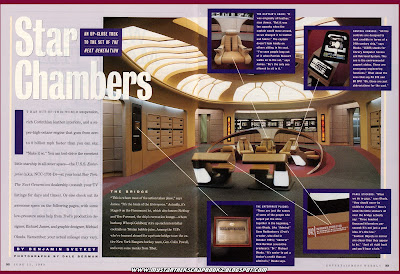 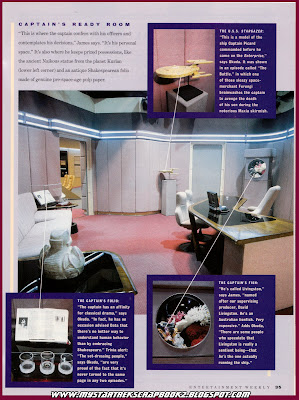 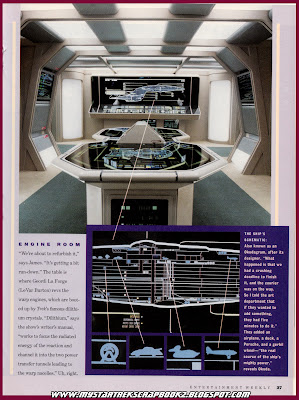 Posted by Frederick McCloud at 10:23 AM 3 comments: Links to this post

In December of 1994 this "Cracked" magazine spoof of the first "Next Generation" movie came out. Severin, who has been doing Trek spoofs for over two decades by that time, nails the features and costumes as usual... but, unlike some of the others, he obviously had not seen the film when drawing it. He is probably working from a script and promotional photos, as the deleted sub-orbital skydive sequence is still here. Hardly any of the scenes are accurate in the design details, which is typical when one is working from a script. But, he can't be faulted, as so often this was the case when the magazines were trying to get the spoof on the racks at the same time the movie was out. 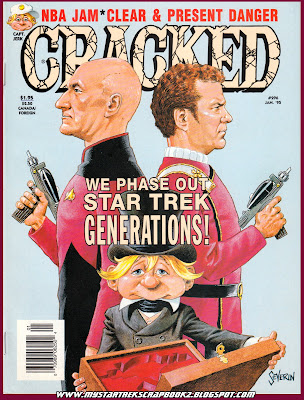 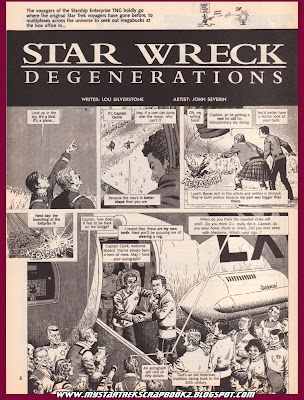 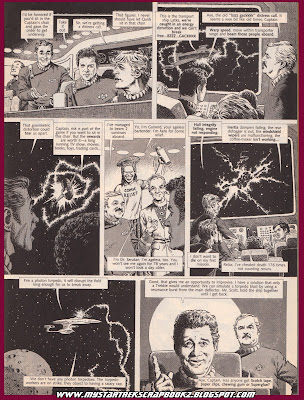 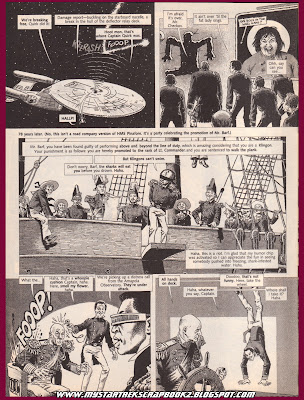 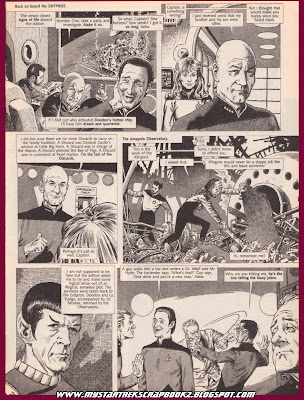 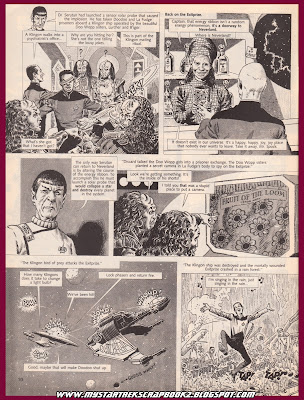 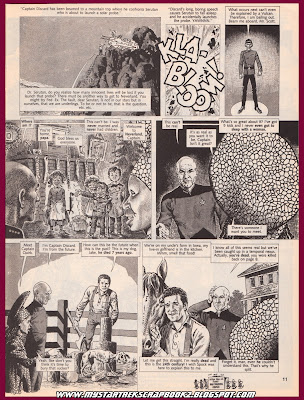 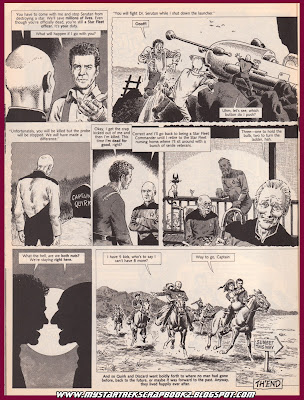 For the record, I liked their ending better than the one in the movie! Kirk really didn't have to die (again) at the end for the torch to be passed. He could have simply went off to live in peace and let everyone think he was dead.
Posted by Frederick McCloud at 2:20 PM 1 comment: Links to this post

I cut out this back and side panel from a box of Cheerios sometime in the winter of 1987. I wonder who the winner was, and what episode they appeared in? If you know, leave a comment! I did send off for the Enterprise poster, and it's in my collection cabinet somewhere... when I find it I'll scan and post it later. 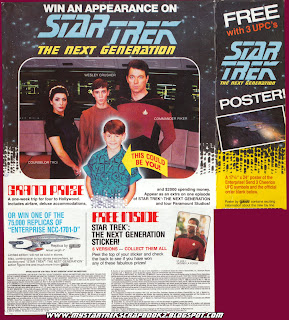 That kid is way too cocky to be a real Trekkie.
Posted by Frederick McCloud at 4:51 PM 3 comments: Links to this post

Welcome back!This time we are looking at the first Mad magazine spoof of ST:TNG, from issue #282, published October 1988, which means it was on the newstands in September. Featuring spot-on caricatures by the legendary Mort Drucker, and writer Frank Jacobs on-target satire of the show, this spoof is one of the better ones ever done on the show. Set phasers to "tickle" and engage! 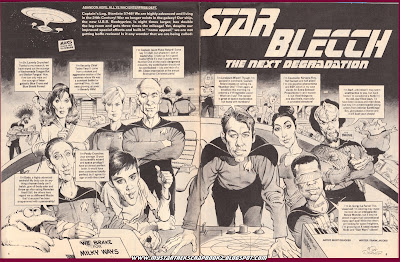 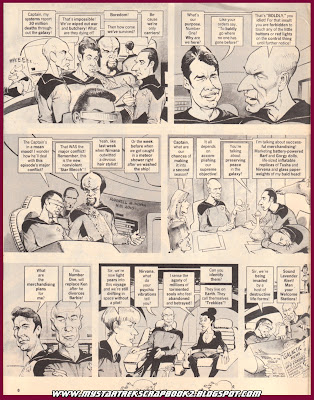 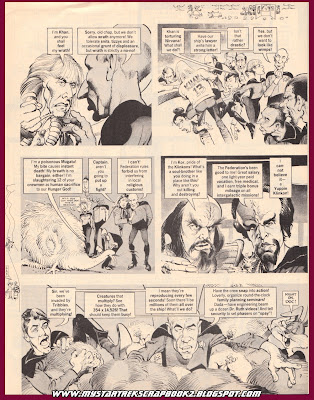 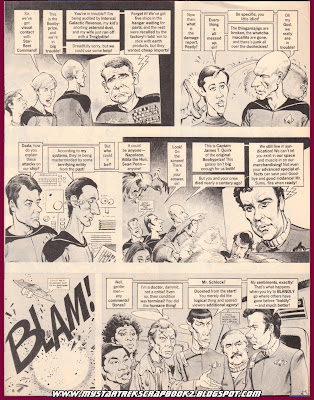 Of course, the parody is made even better by the appearance of the original crew at the end. A satisfying conclusion!
Posted by Frederick McCloud at 6:24 PM 4 comments: Links to this post

This blog is a showcase for the various items in my scrapbooks concerning the Star Trek incarnations that came after the shows and movies by the original cast; starting with "Star Trek: The Next Generation" and covering the various TV spin-offs and movies.

Visit my other Trek blog, the original Trek Scrapbook! 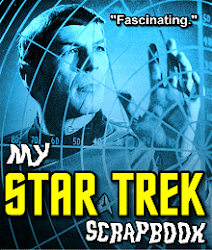 My Star Trek Scrapbook: devoted to the adventures of the original cast!